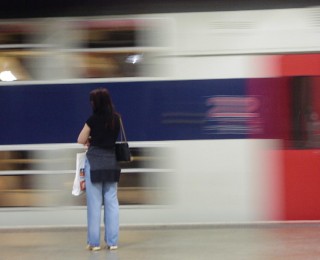 Xoom is one of the first purely Internet based international remitting service companies; and a successful one, demonstrated by its going public in 2013. It essentially offers the same service as described in the Western Union post, but only online, with lower pricing and higher security. Xoom’s popularity pushed its traditional competitors such as Western Union and MoneyGram to provide a digital funding service and to slash their prices.

As a consumer, you really need to get an estimate on both Xoom’s and Western Union’s websites to decide which one is cheaper depending on the amount, funding mechanism, and destination country. Continuing with our Germany example, Western Union charges a lower fixed fee than Xoom ($2.99 vs $4.99), but higher premium on exchange rate (1-1.5% higher.) Also, Xoom does not offer cash pick up in Germany, while Western Union does. Nevertheless, Xoom promises two day delivery vs Western Union’s five day. Therefore, one is not necessarily better than the other. It all depends on your circumstances.

So how was Xoom able to offer faster and cheaper service in the first place? At the sender (US) side, Xoom operates with lower cost mainly by not maintaining a physical customer-facing infrastructure, and also by reducing losses with greater security afforded by bank-to-bank ACH transactions. Xoom transfers part of this cost-saving to consumers.

On the receiving end, Xoom only provides instant delivery (within a few hours) in countries where there is an immediate payment service network in place for domestic transactions. Xoom partners with a local financial institution to settle all the small transactions into the country in bulk at a pre-negotiated exchange rate. The local partner is responsible for dispersing the funds to other banks, and the banks assign payments into the individual’s account according the information from Xoom’s system or SWIFT messages. When such infrastructure is not in place, Xoom uses the traditional international wire transfer mechanism as covered earlier.

The graph below illustrates what makes Xoom’s instant international transfer from the US to India possible. 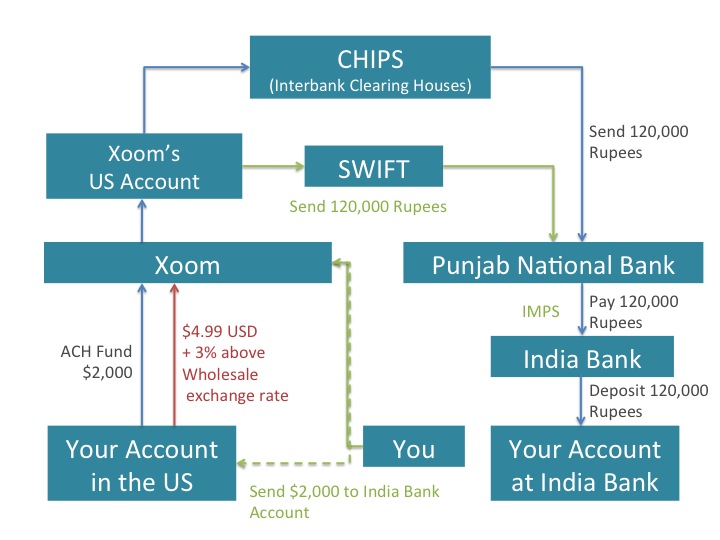 In summary, Xoom’s innovation is in moving the remittance service online and in turn lowering the cost. The company still uses the existing interbank wire transfer system and domestic electronic clearing system, and operates within the systems’ constraints. Although Xoom promises instant transfer in certain countries, it has little control over the actual delivery, whereas Western Union can because of its use of agents and agents’ funds. (In fact, quite a few customers complain about “false advertising” when the funds were not credited in the receiving account instantly as promised, although Xoom has no control over the receiving end.)

Next to wrap up the series I will discuss TransferWise, which also aimed to disrupt the industry with a different business model.