No foreign transaction fee or exchange rate markup… is it true?

For globetrotters, keeping the cost of foreign transactions low is a must. After all, we don’t always make an income and open a bank account in every country that we go to.

Many of you may already know that Schwab Bank offers a checking account that allows you to take cash out from worldwide ATMs with no foreign transaction fee and full ATM fee rebate.

It probably sounds too good to be true. I’ve encountered many people claiming that Schwab must be giving them a worse exchange rate. Otherwise, how do they make money?

We’ve been using Schwab since 2011. In fact, it’s our first joint account of any sort. We filled out the application one month after we got married, in Mexico, and since then it’s been our primary checking account.

Why did we choose to open the account at Schwab? We did it exactly because they had just started offering no foreign transaction fee checking account. After some research, I also discovered they do not charge a markup in exchange rate. Since then, I have not worried about the cost of taking out cash anywhere in the world. We’ve done so in the US, Mexico, Japan, New Zealand, Samoa, Australia, Singapore, and Taiwan without a hitch.

So whenever people claim that there must be a catch in what Schwab offers, I feel suspicious. To put the rumor to rest, I decided to double-check my recent transactions.

Before I go any further, I’d like to stress that I do not endorse Schwab Bank, and I don’t earn money from them if you decide to sign up, or even by writing this post.

The goal of this post is to go over the process of how you may check your own foreign transactions to determine how much you pay.

Also, if you want a full understanding of how ATM works and costs, go read this post. You need to know which parties are involved in an ATM transaction to judge who gets paid.

In short, ATM transactions involve your bank, the interbank networks (usually PLUS or Cirrus), and the ATM operator. All three parties may charge you for the convenience of getting cash wherever you are. Even if your bank doesn’t charge you anything for foreign transaction, the other two parties might.

In Schwab’s case, it chooses not to charge its customers at all in such transactions. (How do they make money you ask? Holding your cash alone can help them generate revenue and meet minimum reserve requirement.) It even go so far as refunding any ATM charges from the ATM operator. Schwab chooses to open very few bank branches and keep the operation mostly online. That’s why it allows customers to utilize other bank’s ATM without extra cost.

When the transaction is in country, the interbank networks don’t charge extra other than the membership fee. However, when the transaction involves exchanging currency, they usually charge a markup, usually at 1%. This markup may change depending on the currency.

Visa and MasterCard publish their daily exchange rate tables by currencies. So whenever you are assessing the exchange rate applied to your ATM transaction, you should go there, instead of the market exchange rate you find on general Forex websites.

Schwab uses the exchange rate from Visa directly without charging a mark up. I’ll show you an example from our bank account.

From the Visa website, I found the exchange rate that applies to transactions that went through on March 18th. Note that I enter 0% bank fee because I know Schwab doesn’t charge it. The exchange rate turns out to be 1:0.032786.

As you can see, it’s exactly the same! Schwab indeed didn’t charge anything. All it did was applying the Visa exchange rate.

You may wonder, how different is Visa’s rate from the market rate? On xe.com, the exchange rate is 1:0.32751 at the end of March 18th, so the markup equals:

Note that it might not be how Visa actually calculated its rates. The currency exchange market is like the stock mark. The trades happen all the time, so during the trading hours the actual exchange rate changes. In this particular case, I paid 35 cents to get $327.51 USD. I think it’s a pretty good deal.

Of course, there might be banks that would refund you the difference between Visa exchange rate and end of day market exchange rate. I just don’t know of any, and I’m not sure if I want to take the time to find out. I’d just add that from a bank’s perspective, it actually requires some IT infrastructure to make that possible. So perhaps there is a bank that wants you business so bad that it’s willing to invest in a system just to calculate the refund it should make to you. I don’t think a lot of banks will compete to make that a value add to its customers in the current climate.

How about credit cards?

As you know, Visa and MasterCard also operate the interbank network for credit card transactions. There are a lot of US credit cards that offer no foreign transaction fees. We use Capital One, which is one of them.

So does Capital One credit card charge a markup on exchange rate to make money? Let’s find out.

On March 22nd, we purchased dinner for TWD 550, which shows up in our Capital One statement as USD 18.05. The transaction was posted on March 23rd

So the moment of the truth – Capital One credit card doesn’t charge you for foreign exchange either. In case you are interested, you can also learn more about how credit card transaction works in this post.

Last word of advice – as you can see, the date that the transaction was posted matters. Sometimes it takes a few days for the transaction to go through, so the final posted amount actually changes. The same thing may happen to your ATM transaction as it stays in the “pending” status.

I hope this is helpful for those who are evaluating their banks or seeking to lower their foreign transaction cost. Let me know if you’ve found better solutions! 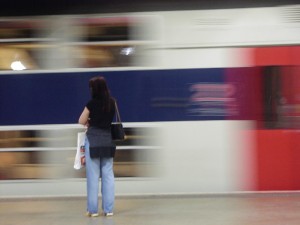